July 19, 2018 Yesterday, after we left the St. Louis RV park, we were trying to figure out where the closest grocery store was. The map app located one nearby but it was little more than a corner store; so we drove on, and a few minutes later came across a shopping center with what looked like a grocery - a ‘Save-a-Lot’. we went in and found it patronized only by African American folks, save for a white security guard with a blue shirt and handcuffs and a gun, standing watching everyone.

Presumably he was performing some important function like just making sure this store full of African American shoppers kept in line. I was keenly aware of being in the minority in there; and while I felt no animosity from any of the other shoppers, I was never able to make any eye contact with any of them, and so it felt strange - but that strangeness is probably just what African Americans feel when in a totally white store. It was a stripped-down grocery, with cheap signs and uniformly bland packaging and of course, very low prices. It was a good experience to have and I felt that the Boulder Bubble had finally burst. Neither Paige nor the kids never realized that we were in the minority, when I asked them about it later. 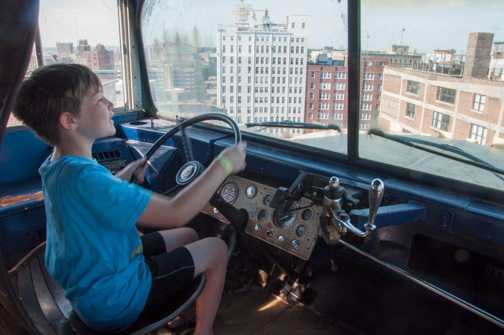 we stick out a lot
at the ‘Save a Lot” grocery
downtown St. Louis 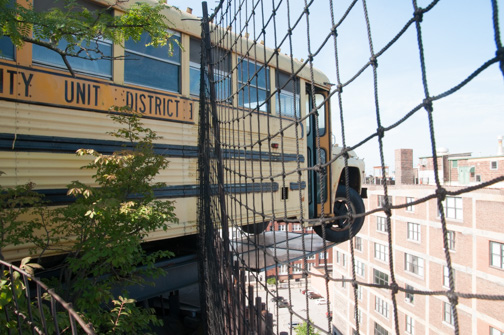 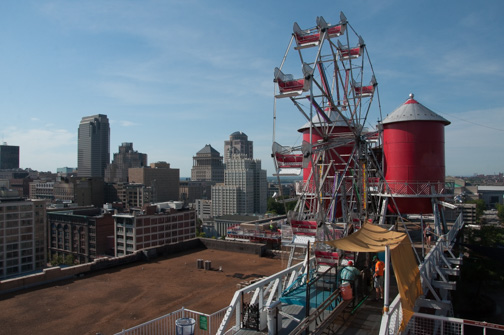 This last stretch has been brutal, although I will say we had a lot of fun in St. Louis. Yesterday morning, before we departed, we had an adventure downtown exploring the fantastically playful City Museum, an old shoe factory that has been converted into a singular piece of artistic expression with funky passageways from floor to floor including a spiral chute that goes all the way from the roof to the bottom, using the old “shoe chute’ that was part of the original building. On the roof sits a ferris wheel, a bus parked over the edge of the building, and several unusual slides, smack in the heart of the downtown area. We rode our bikes down there. It was only .7 mile away, so it was easy to get to.

The kids loved the museum and loved being able to be so physical, climbing around on the tubes of welded steel rods. The defining physical characteristics of the place were molded concrete sculpture and steel welded passageways and walkways. Outside, over a pit full of balls that the kids jumped around in, there hung precarious walkways; tubes of wire hung between an elevated airplane fuselage and other weird and playful structures. A fun time. 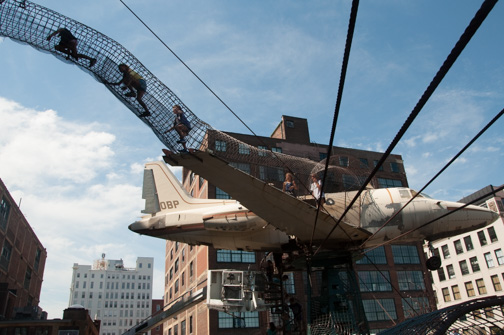 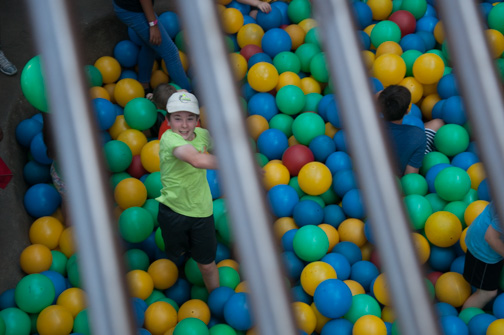 A tree branch just fell on the Cricket here at the ‘Stadium RV Park’ in Kansas City, Missouri, spreading leafy debris, and a cockroach just skittered past me. Cigarette smoke is wafting my direction. A guy across the way just took his dog out for a 5-minute walk, put the dog back in the RV, then got in his pickup and zoomed away. The dog was clearly eager to be outside, given his gestures and response to the open air. A woman who looked fairly depressed slowly walked around the park with her two small dogs, smoking a cigarette, never looking our way. 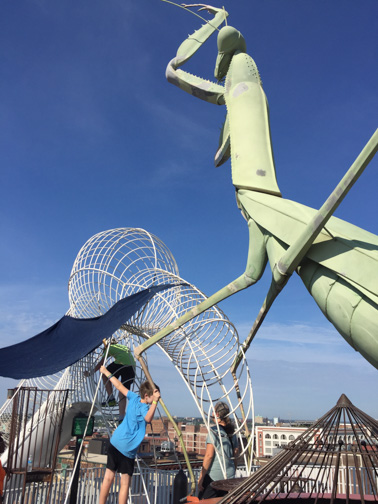 Yesterday I took a brief walk around this place after making the 3.5 hour drive from St. Louis, and I stopped to talk to this elderly guy who was walking around. He seemed a little down and out and said he lived in his trailer with one of his 6 grown kids. (I later ran into to his son in the gross bathroom, washing out a coffee pot). He mentioned that they were trying to buy a house. It clearly seems that most people here are itinerant, and not travelers. I guess that’s what you get when you pay $35 for a spot at a questionable RV park on the edge of town. Paige really dislikes it here, as the bathrooms are filthy and smell of sewage, and the place overall has a fairly sketchy feel. 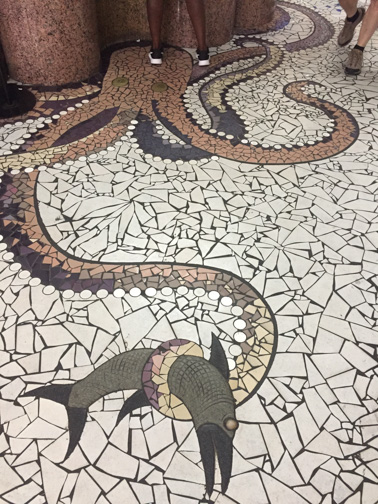 Well, we will be leaving soon, provided a bigger branch doesn’t fall on us, for a 6 hour drive to the other end of Kansas, where we will stay in one more KOA before making the final drive home. 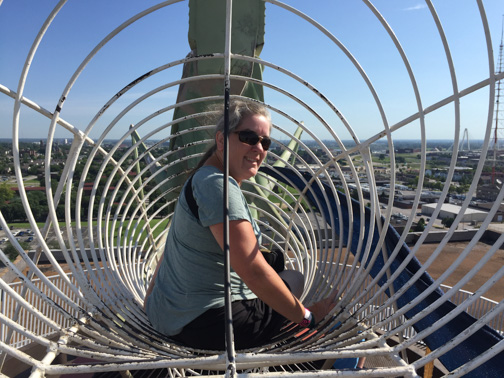 hauling a Cricket
along the Oregon trail
with a car, not cows 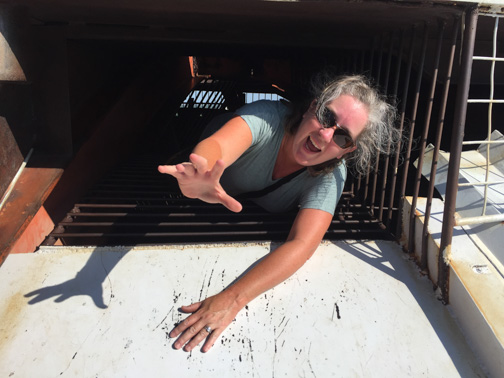 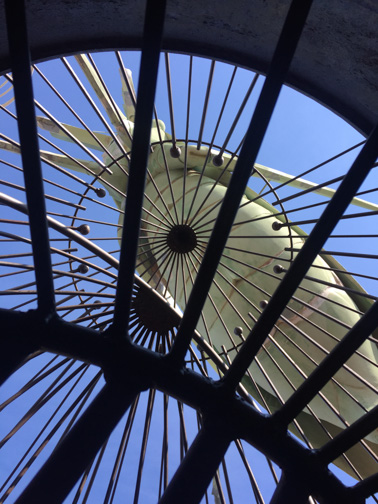 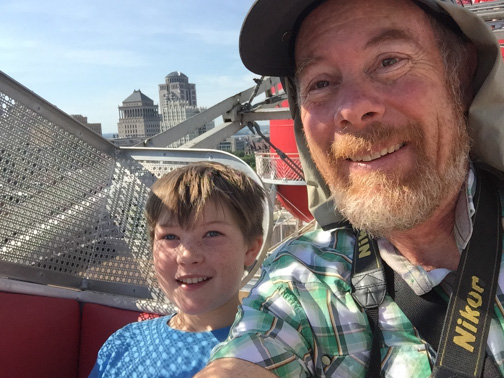 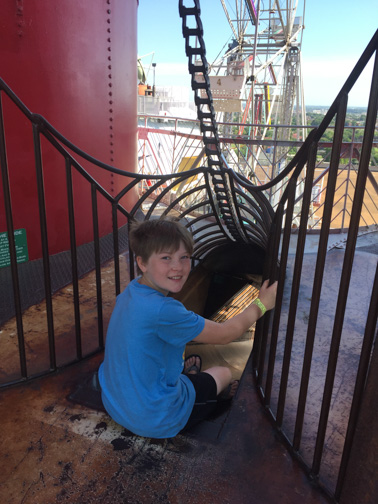 tollway fee mishap
carefully counting the change
only to drop it 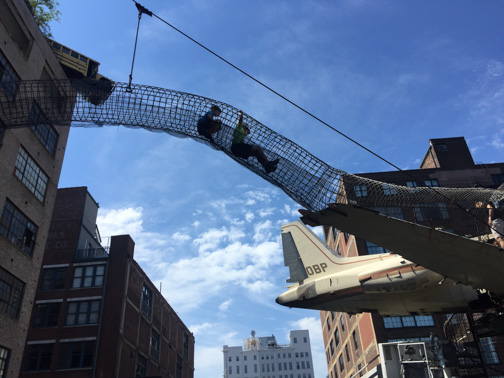 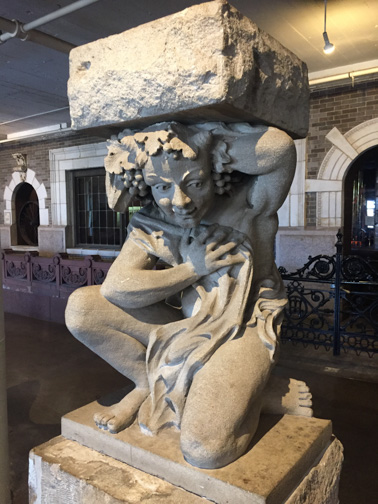 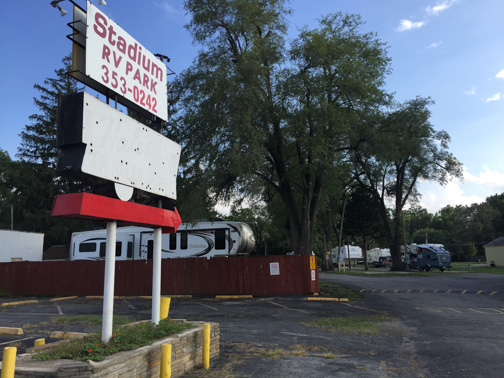