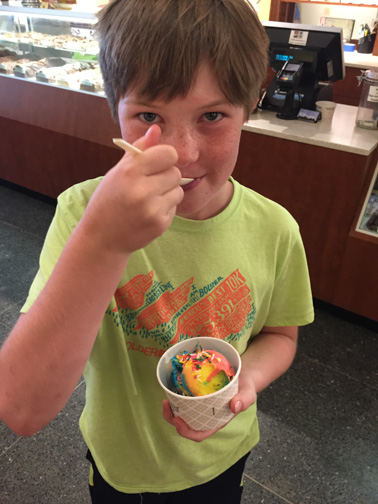 July 15, 2018 We are leaving this morning for Nashville - it’s around 6:30, and I couldn’t sleep past six. Orion left an essential oil vaporizer running in the Cricket all night; Suzanne gave it to him since they had an extra one, and he was fascinated with it, but It actually made the air more humid than it already was, which seemed to add to my nightly distress. My ears are ringing severely, especially my right ear, which responds to the air conditioning with acute buzzing.

Anyhow, I have been reading in the New York Times about how Trump is about to meet with Putin, after disparaging both the British Prime Minister and NATO. I couldn’t help thinking about how some friends back in Boulder feel he is being ‘controlled’ by something, but I don’t think that is the reason he is being so deferential to the Russian dictator. His lack of empathy, awareness, and deep corruption are the more likely reasons, but I am deeply bothered by his behavior. 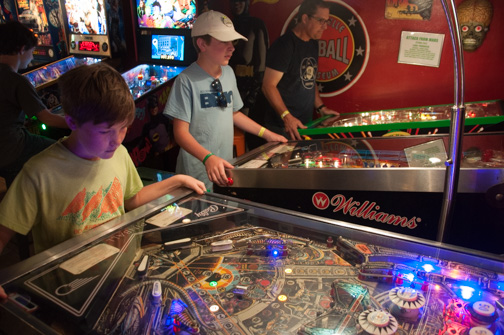 We’ve had two great days with Evan and Suzanne, one of them spent exploring around, first eating at ‘Duck Tacos’ down by the river arts district, then Evan took us to the Pinball Museum. But first, we got ice cream in the very same shop we visited 4 years ago, where Phoenix distinctly remembered getting this multi-colored concoction called “Superman Ice Cream”, so he happily had it again. Orion ate fudge.

The pinball museum was packed, and almost every machine was in use; they have a large collection of vintage pinball machines available to play, with some of the earliest models, as well as more modern ones from as recently as 2015, and several rooms full of early video games like Pac-Man and Donkey Kong. There were limited-edition pinball machines such as the one celebrating the Who’s ‘Tommy’, in which Elton John as the Pinball Wizard was featured prominently; one machine featured the band ‘Kiss’, and so on. We hung out in here for at least an hour - the din and noise and flashing lights were intense - and I played a bunch, despite feeling super sleepy most of the day. It was interesting to consider the innovations that have gone into pinball machines as well as their rapid evolution. However, compared to geological change, such evolution is not even history, it’s the blink of an eye.
Speaking of evolution, Evan likes to talk about changing trends in technology, and we mused over Elon Musk’s proposals to make underground tubes to transport people, and what is in store for the future with the onset of artificial intelligence, and the continued rapid evolution of computers. 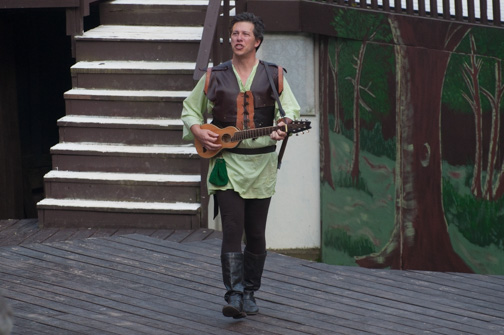 In the evening on the 14th we packed a picnic lunch and drove out to a nearby neighborhood where an outdoor play was being performed. The seating was on a grassy hill and faced a large stage. We got there early enough to set up our chairs and eat our lunch. I was feeling a little worn out from all the socializing we have been doing, so I sat quietly with the kids, spacing out at the people there, recognizing this event as a very ‘white’ cultural one, but I did notice two younger African American kids at the back of the audience. In fact, after being in Washington and Philadelphia and mixing (informally and, admittedly, not especially personally) with more mixed races it seems I was more sensitive to it. We so easily fall into our white ‘tribe’, underscoring the fundamental difficulty our country has with a good resolution of these issues.

The play “Robin Hood” was a fun amateur production, but way too long, about 3 hours. It was written by somebody locally; they had a difficult time resolving the dramatic tension of what was going to happen to Mr. Hood, despite his socialistic money-changing mission. He was exonerated from the clutches of the sheriff of Nottingham with a bow-and-arrow contest, which he won in disguise, but by that time Phoenix was looking at me pleadingly and demanding to know when it was going to end, always a bad sign. 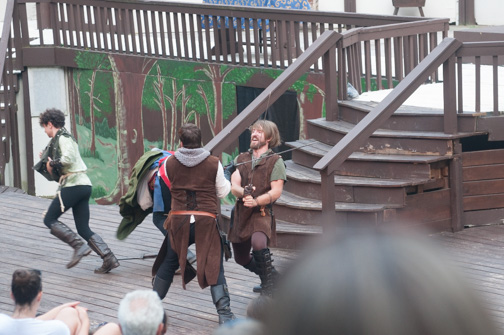 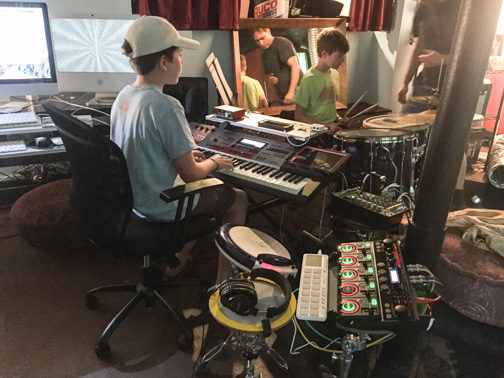 the sea of faces
in the audience - all white
comfort in the tribe?

Yesterday we pretty much hung out at the house in Asheville. The kids have loved playing with Nigel and Kikosan; Orion made cookies, and I suggested to Evan that we try recording some music. He and I spent several hours playing; I chose a number of tunes that I thought might go well with his hand-drumming. We got some good takes, but he made some incorrect hook-ups with his recording device so some of the recordings didn’t sound right. Regardless, it was just fun finding the groove with him, and spending some creative time together. I also did a drawing of their house, and gave it to them.

In the evening, Suzanne’s mom Aleta and her boyfriend Bob came by and we had yam, kale and bean burritos outside in their bamboo garden. Such delicious light filters down form above the tall poplars into the bamboo grove. It was peaceful.

One of the first things I did on Friday morning was to reserve a few more places to stay on this last leg of our journey. I was successful in making four reservations that will get us back to Colorado with electrical and water hookups at every stop along the way. We are essentially going the most direct route, through Nashville to Kansas City - 1,482 miles, roughly 21 hours of driving. .

never-ending quest -
pac-man gobbles up the dots:
eat or be eaten

yesterday’s graphics -
consigned to oblivion
in this museum

tilt mechanism
evolved along with pinball
to stop the cheating

game of skill or chance?
captivated by physics
and the flashing lights