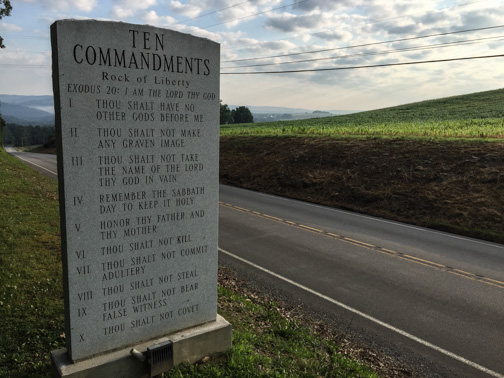 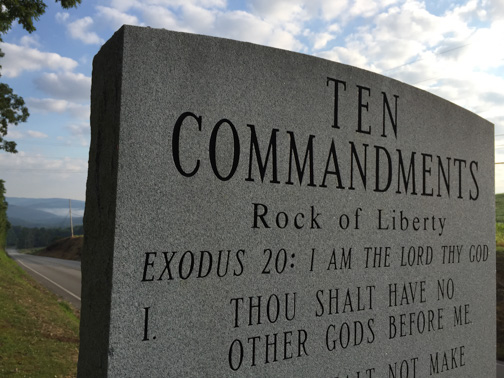 July 11, 2018 Stationed here at a KOA in Sutton, West Virginia between a ‘Sea Breeze’ and an ‘Allegro Breeze’ (giant RV’s) with low clouds all around us, so much so that it is almost foggy. Our bikes and towels lie splayed across the picnic table and concrete pad next to the Cricket. My ears are ringing ferociously, perhaps a result of the ‘low clouds’. I slept ok, but had to leave my spot early, as my ears felt like they couldn’t take it any more. 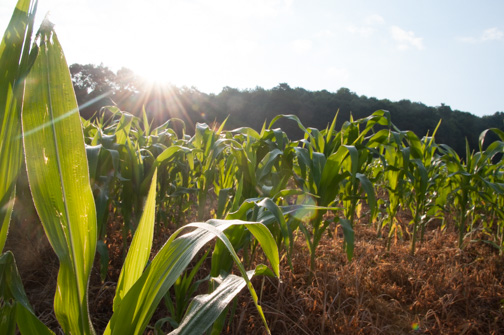 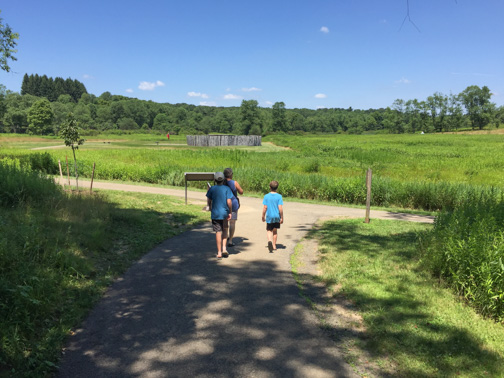 It only took us a few hours to get here after leaving ‘Camp Jellystone’. The kids went for a final swim as we packed up, and by 11 we were driving down the road. Only about an hour into the drive though, we passed ‘Fort Necessity’ and I pulled over because something about that name rang a bell. It turns out that I had just read about it, in my book about Washington (His Excellency, George Washington, by Joseph J. Ellis). Fort Necessity is the site of Washington’s ill-fated surrender to French troops in 1754, where, because of his unintentional admittance of killing a French officer on his first foray into the area, the French and Indian War started. I had not planned a visit, nor was even aware that the site was so close to us; but since we didn’t have too far to drive, I entreated the family (despite their protestations) to take a short detour there. 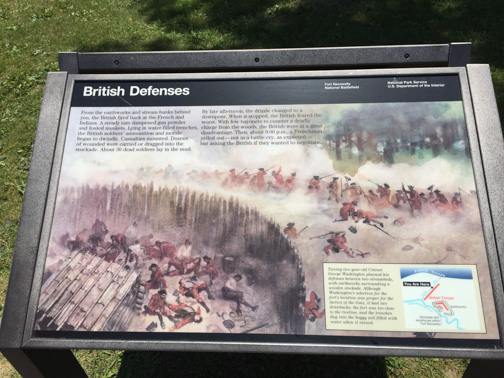 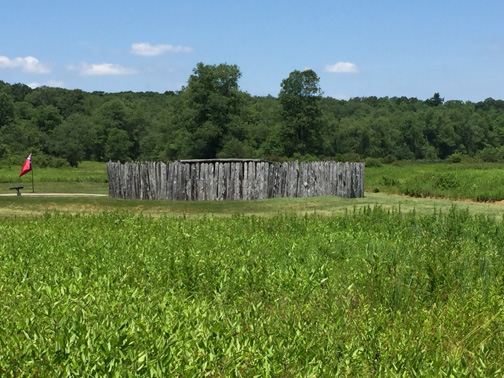 We were able to watch a short interpretative movie right away, which helped with our appreciation of the historical significance of the spot. The visitor center, too, was quite good. No-one in my family wanted to take a guided tour with the ranger, a young girl who seemed alternatively disinterested in leading us along or wishing we would agree to it; at any rate, the best I could do was to convince my irascible children and anti-social wife that, at the very least, we should walk around the reconstructed fort, and this we did, taking the cool and sun-dappled walk to the clearing punctuated by a circle of grey upright timbers with a store-room in the center. I really appreciated the delicious sense of ‘time past yet drama still present’ that sites like this offer. 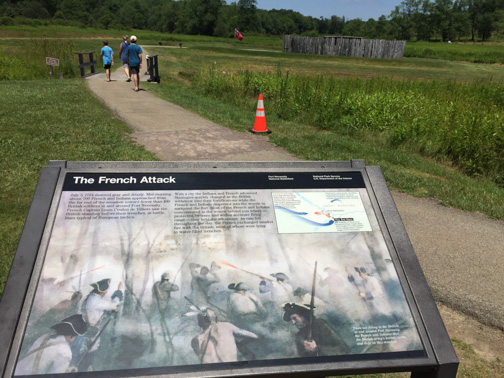 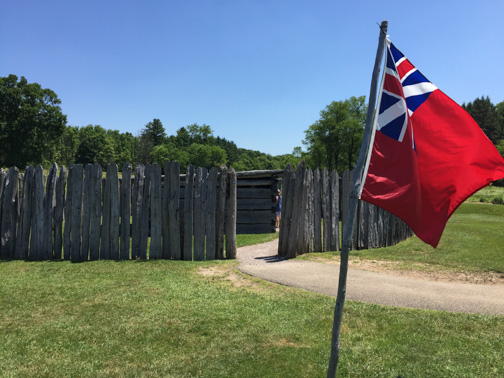 Later in the evening, I read - out loud to the family - sections of Ellis’s book that talk directly about Washington and his experience at the fort . This is about as far west as he ever got, so being here also brought into focus the extensive travels he made from his home base in Virginia. My mood was quite good during this foray into the past, perhaps because of the spontaneous nature of the visit, and the rich historical context that resulted. 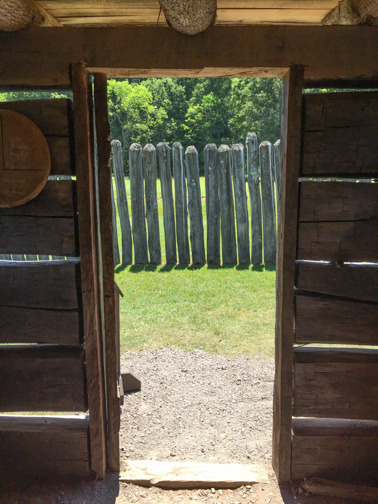 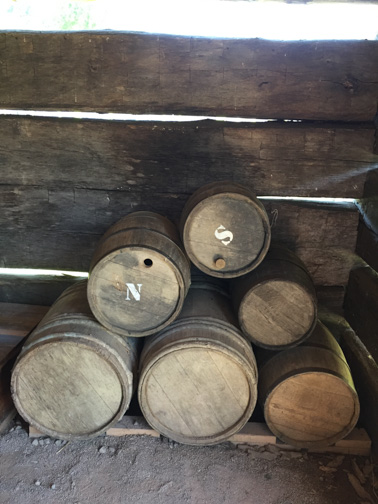 Moving on, we found ourselves in a town called “Uniondale’ around 1pm, and so decided to pull over somewhere shady to stop. Unfortunately, we drove all through town without ever finding a park or shade, so we eventually pulled into the back of an old school, where we made lunch in the beating sun. 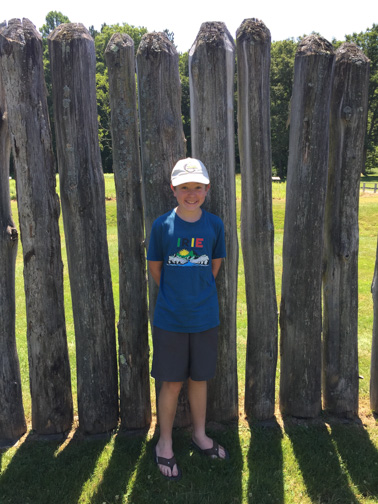 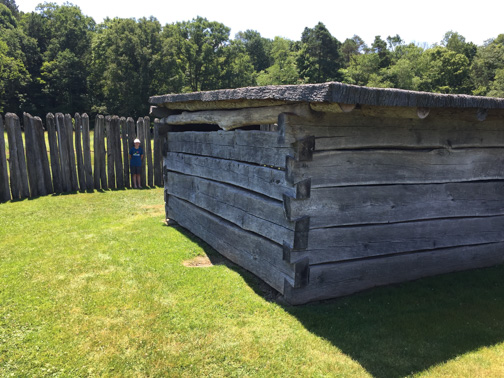 We traversed the rest of the roughly 111 miles to the Sutton KOA on hilly highways through West Virginia. The Volvo strained to go even 50 mph up some of the hills. Will it be like this all the way to Asheville, where we are to meet up with Evan and Suzanne? 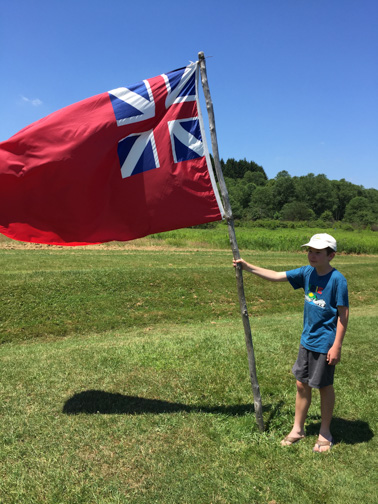 This KOA is part of a Day’s Inn. We are camped down a hollow, and the hotel/restaurant/pool complex is up top; there is a narrow, steep path that connects us to the main hotel, right past an outdoor amphitheater. I called Mom, and told her about our recent adventures. It turns out that she has been to both Falling Water and Fort Necessity, and we reminisced together. Paige sat with the kids in the air conditioned Cricket, and she called her parents. We had leftovers with tiny sausages and then rode our bikes up to the interior pool, where we splashed around in murky water while watching the sun go down over West Virginia hills, through large plate glass windows. 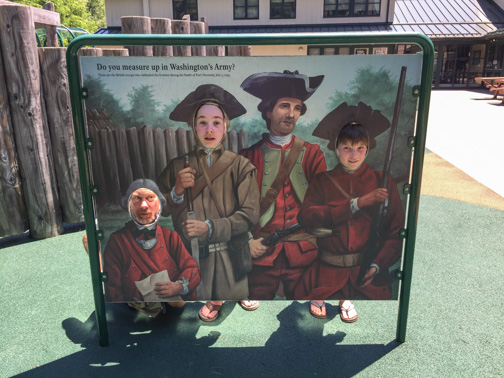 watch for ICE on bridge
rounding up immigrants,
separating kids 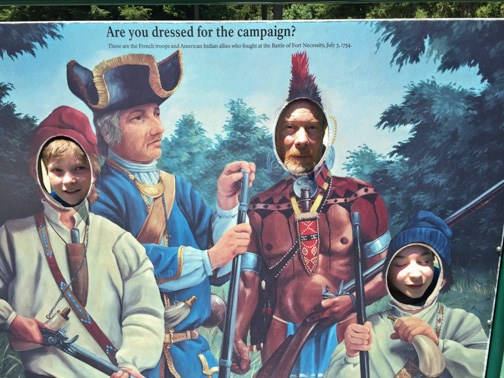 driving a pickup
with cigarette in hand
West Virginia gal 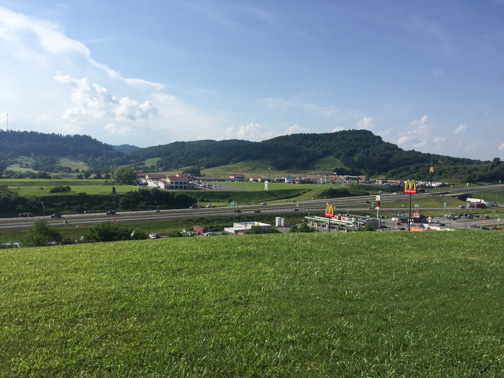 throwing cigarette
to the ground as he enters
gigantic Wal-Mart 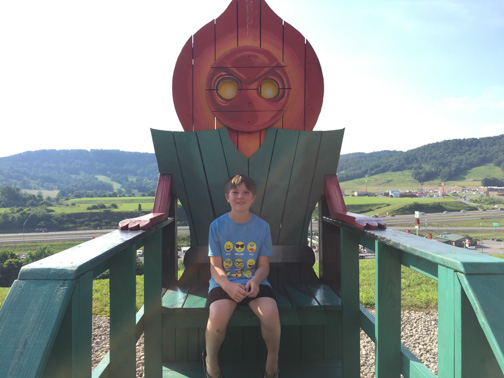 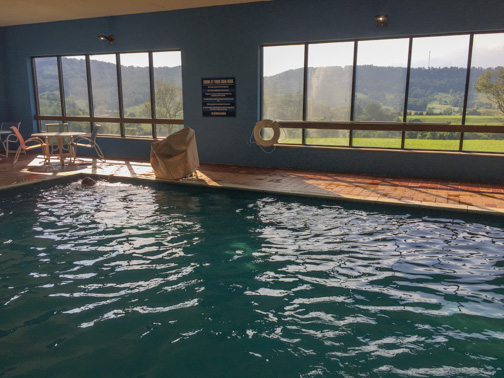